K-5 lesson plans on a variety of topics
pinterest link

a model for mindfulness

I'm a big fan of Dr. Dan Siegel and his teachings on the neurobiological understandings of mindfulness. Here is a doctor with vast knowledge of the intricacies of the human brain, yet can break this down into easily understood writings and models for the average parent, teacher, or child. He certainly made my graduate classes about neurobiology easier to understand!

So I was excited when I found his brain hand model written into the current Second Step curriculum, within the third grade unit on emotions!  Here is a video of Dr. Dan explaining (in greater detail than you would with third graders) the brain hand model:
I decided to use the hand model for the first lesson in the emotions unit for both third and fourth graders. I started out by asking students if the brain is connected to feelings, and if so, how. Students shared ideas with partners, then I asked them to keep their discussion in mind for later in the lesson. Then, the same partners played a version of the mirror game. They were asked to take turns leading and reflecting the facial expressions and body language of various emotions. We discussed how individuals can vary in the expression of the same emotion, and how one person's emotions can affect others' emotions and moods, and why we sometimes hide our true emotions (i.e., around unsafe people, because we fear losing control, etc). Students seemed to really enjoy both the reflections and the brief discussion.

Next (in a variation from the Second Step lesson), I shared a story from my own childhood when I  was a new student and tried out for the basketball team. I felt very nervous, because I wasn't sure if I would make the team and I didn't know the other girls or the coach. Then I asked all the students to close their eyes or look down, so everyone could have privacy. They were asked to think of a time when they felt very nervous, and how it made their emotions and body feel. I listed off some signals of anxiety like a racing heart, sweaty palms, and negative self talk, and asked them to raise their hands if they felt those symptoms during that memory (This turned out to be a great way for students to honestly share what they experience without judgement from peers, but also a quick check for me as a counselor/teacher about which signals came up most often and the corresponding coping skills I should teach in lessons to follow!). I thanked students for honoring their peers' privacy by not looking around. Then, I shared that everyone raised their hands at different signals, which means we all experience nervousness in a variety of combinations. This is important because it can be tricky to identify exactly how we/others feel if we think there is only one way to be angry, sad, overexcited, or anxious. Instead, we must recognize that everyone is unique and experience emotions in slightly different ways.

It's true... our bodies give us clues about how we feel. I drew a simple stick figure person on the board, with a head, spinal cord, and brain. We talked about how the brain is in charge of our entire body, and directs our thoughts, actions, and even feelings. The brain sends signals to the body through nerves in the spinal cord and down through our arms and legs. If we want to wiggle our toes, we think it and almost instantly our toes move. If we feel sad, our eyes might start to tear up almost instantly.
We talked about how different parts of the brain are in charge of different things, like playing the piano, remembering math facts, or talking to our siblings when we are mad. Students will learn more about the specific parts of the brain as they study and read, but they should know two basic parts: the thinking and feeling parts of the brain. I labeled the picture, then moved on to the brain hand model.

I asked students to hold up their hand with their four fingers straight up and their thumb to the side. They then folded in the thumb and we talked about the feeling part of the brain: this section of the brain controls our breathing, but also stays alert to our surroundings and responds with emotions like fear, excitement, or sadness. If we aren't thinking things through, we will react to those feelings automatically… and often these impulsive actions can get us into trouble! Then they folded the four fingers down to represent the calming thinking part of the brain. If we are thinking before we act on emotions, we can predict reactions, and think about consequences. It was amazing how quickly students caught on to this! We wrapped the lesson up by talking about the idea they had at the beginning of the lesson about emotions and the brain. Finally, as their teachers took back the class, I had them show which part of their brain was in control during these types of scenarios:
1. You hit your brother because you are angry (feeling position).
2. You take some deep breaths when you present a speech in class (thinking position).
3. You are tired so fall asleep in the middle of class (feeling position).
4. You plan your birthday party with your mother (thinking position).

We covered a lot in the lesson, so I think it would be possible to split it up into two lessons. However, teachers and parents gave a lot of feedback that their students were talking about the model and applying it in class and at home! I plan to follow up in the next lessons with talk of how to engage the thinking part of the brain to calm strong emotions. 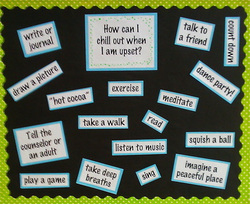 I try to teach a variety of coping skills throughout the year in classroom lessons, small groups, and individual meetings. The goal is for students to have a "grab bag" so they can choose the coping skill that suits their individual needs in an emotional moment.
Skills can include (with corresponding actions):
* picture postcard (imagine a happy place & picture it on a postcard)
* silly count down (add a silly word like cheese or hippo between #s from 10 to 0)
* slo' mo' song (practice singing Twinkle Twinkle Little Star in slo mo)
* animal poses (cat stretch, one leg flamingo stand, frog squat, arm-arching peacock)
* "hot cocoa" (see Teacher Tipster's video below!) ***Student favorite! *** 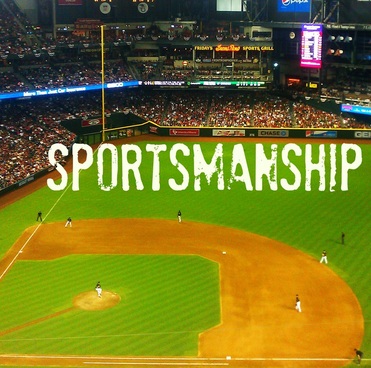 Students in grades 2-3 are passionate about fairness and following the rules! When asked, they know exactly the right answers about good sportsmanship. Yet, these passionate feelings rarely translate into recess games and activities that run like well-oiled machinery. In fact, the vast majority of hurt feelings and problem solving concerns seem to center around the arguments arising from these games. Thus, a lesson about sportsmanship was needed.

The lesson began with a discussion about what a good sport looks and acts like. We made a list and the students had all the right "pat" answers (i.e., agree on the rules before you play, pick equal teams, congratulate the winner, don't brag if you win, etc). We also discussed what to do when someone seems to be cheating or not following the rules; students were genuinely surprised at the concept that others may not KNOW the rules and  need to be taught, as opposed to automatically accusing them of cheating.

Then I announced that the class would be playing a game with absolutely no interference from the adults in the room (caveat: I would step in if things became too hurtful, which is not always true when they play games at recess or in their neighborhoods). I chose Heads Up Seven Up because most students were familiar with it, but other group games could work as well. Then I stepped back and let them work it out on their own for about 15 minutes. It was interesting to watch the differences between classes. Some classes had a natural leader or two, others worked together to talk it out, and still others consistently argued and struggled for control. I really appreciated how students tried to consider the concepts we had discussed at the beginning of the lesson as they played.

For the last 5-7 minutes, we discussed how the game had gone. I asked if they thought the game was fair, then fun, and why. Many said that they wished a teacher would step in and fix things, so we talked about how they can be empowered to solve the issues on their own. Students came up with some areas they could still improve in, such as how to pick teams fairly and how to deal with students who seemed to be cheating, which we can address in future lessons. I really enjoyed this lesson because I felt that students were fully engaged and appreciated such practical, "real life" learning, and I learned a great deal about the interpersonal dynamics of students when they are not in the classroom setting. Fascinating stuff!

One of the topics covered in the Second Step program is cause and effect. While I was planning for the lesson, I decided to have the fourth and fifth grade students make a T chart with examples of actions and possible reactions. This is pretty standard teaching technique, but what happened in the first run-through was, as one student put it, "counseling magic!"

I started the set discussing the example from the Second Step card. Then the class created T charts by folding blank lined paper "like a hot dog" (vertically versus the horizontal "hamburger" style). I gave several examples of actions and allowed students come up with reactions that seemed logical to them. Here are some examples: 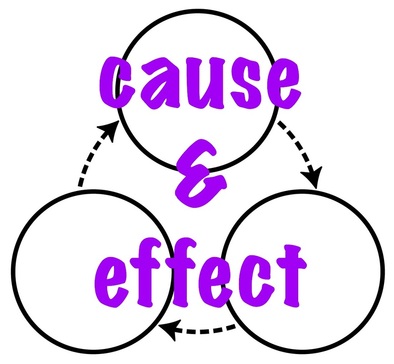 Then the "counseling magic." I asked the students to cross out the word "cause" at the top and write "effect" above it. Then I asked them to fold their paper over and write cause on the right half of the back side. Thus they essentially had a three column "cause-effect-effect"
table. Students were then asked to consider what may have caused the actions from the former cause column. Here are some of the causes they came up with from the examples above:

My favorite part of the lesson was that students immediately asked to change the final effect column based on the "new" causes. One student said they would definitely react differently to a friend who was bragging because they felt insecure than one who was just proud and feeling powerful. It was great to see students make the connection that when we consider WHY people act in ways that may bother us, we can react in more effective ways.

Below is the worksheet I made (though the blank lined paper was equally effective). To read more about a lesson for fourth and fifth graders on cause and effect, go to the ASC blog!