School counselors can take advantage of
numerous mediums to communicate concepts
and advocate for the profession!
pinterest link

the hero in you 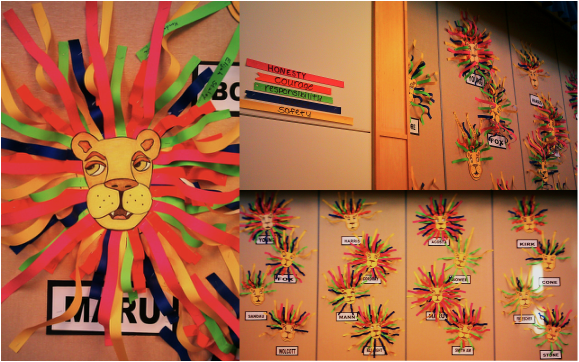 Our elementary school has a long-standing tradition in character education. Each Wednesday, a team of staff hold a ten minute assembly, rotating from Kinder- 2nd graders to 3rd- 5th graders weekly. Over four weeks a chosen character trait is defined and explained to students, along with presentations in a variety of formats. Some of the character traits and presentations we have covered this year include:

Before the year began, our character ed team met to discuss the overarching themes for the year. We decided that a visual would help students to remain focused on the traits they could develop throughout the year. Eventually, we thought of our school mascot, a lion named MaRu (short for our school name: Mabel Rush). Each classroom would be given a lion head, and the mane would be developed throughout the year. As students displayed a character trait, they earned a colorful strip of paper matching that trait. For example, if John brought in all the playground equipment without being asked, he would earn a green Responsibility strip for his classroom's mane.

The amazing and talented music teacher, Mrs. McKinnon, created all 24 lion heads (if you look closely, each lion's face is unique in expression and colors!). They were posted on the wall of our cafeteria, with each teacher's name posted below. Students have written their names and behavior that displayed the trait onto each strip they've earned. As you can see, students and teachers have really taken to this display! It has proven to be an excellent talking point and motivator with students, as well. It's rewarding to capture the character of students- prominently displayed for all to see- and to watch students take real pride in their positive choices!
Powered by